Roger Germann is the President & Chief Executive Officer of The Florida Aquarium in Tampa, FL. He brings a strong history of leadership experience with 25+ years of experience in the private and public sector; Roger is widely recognized as one of the zoological community’s top leaders and strategists. Since joining The Florida Aquarium in June 2017, he is actively elevating the organization with several high-profile recognitions.

Under his leadership, some of the most recent successes and accolades include being recognized from USA Today as one of North America’s Top 2 Aquariums, growing attendance and operations by opening several world-class exhibits, including Moon Bay, only the fourth of its kind in North America, a unique moon jellies interactive touch experience and in 2018, the Aquarium’s second-largest exhibit, Heart of the Sea. Besides, these important successes have been the Aquarium’s huge step forward with its conservation initiatives which has focused on increasing the Aquarium’s commitment to saving wildlife, including the opening of a $4M sea turtle rehabilitation center and becoming the first organization to successfully reproduce Atlantic pillar coral in human care, and increasing revenue and philanthropic support of the Aquarium’s critical conservation, education and community initiatives.

Prior to The Florida Aquarium, Roger served as Executive Vice President for more than 16 years at the world-renowned John G. Shedd Aquarium in Chicago, where he earned his business and conservation leadership reputation. From becoming one of the nation’s most successful and impact-driven organizations to establishing a globally recognized brand, the Shedd Aquarium’s business operations and conservation impact thrived during his tenure.

As a recognized strategic leader in the zoo and aquarium industry, Roger has worked locally, nationally, and internationally with a variety of zoological and government organizations to promote best business practices. He was instrumental in establishing several national initiatives – from working with zoo and aquarium CEOs to create the Association of Zoos & Aquariums global campaign to save species, to launching the nation’s first comprehensive aquarium conservation advocacy program. Before relocating to Tampa Bay, he worked closely with Chicago’s museum presidents and executives to lead efforts promoting Chicago’s cultural interests with City Hall, the State of Illinois, the U.S. Congress, and the White House.
A winner of the prestigious PRSA Silver Anvil Award, Roger began his career in media and has earned media placements on top-rated shows like Good Morning America, The Today Show, The Daily Show with Jon Stewart, National Geographic, Animal Planet, ESPN, and the BBC among others.

Roger served as press secretary to the Illinois State Treasurer, worked for a boutique public relations agency, and is the former deputy press secretary for Illinois’ state legislature. Previously, he worked as a freelance producer for the T.V. show America’s Funniest People and started his career in communications as a freelance writer and producer for ABC 7 Chicago (WLS-TV).

Roger is active in leadership roles on several local and national committees and non-profit boards. In 2019, Roger was appointed by Governor DeSantis to the Board of the Southwest Florida Water Management District and serves on the Tampa Bay Economic Development Council, Visit Tampa Bay, and the Tampa Bay Sports Commission. He has served in several national leadership positions, including a White House appointed member of the Great Lakes Advisory Council.

Beyond his work at The Florida Aquarium, Roger is heavily involved in the community. He dedicates his time in support of Mitchell Elementary School, the Boys and Girls Clubs, and the Bayshore Little League, along with mentoring students from underserved areas.

Roger was born and raised in Chicago, where he graduated with his bachelor’s degree in communications from the University of Illinois-Chicago. Roger and his wife, Laura, and their two children reside in South Tampa. 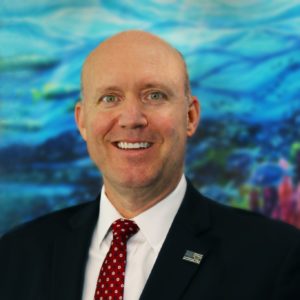